After finishing stabilisation works at Sydenham Station last year, Keller Australia has once again brought its expertise to the Sydney Metro project. This time, on a stretch of rail corridor near Cooks River. We talk to project managers Damien Bray and Jonathan Boyle to find out more. 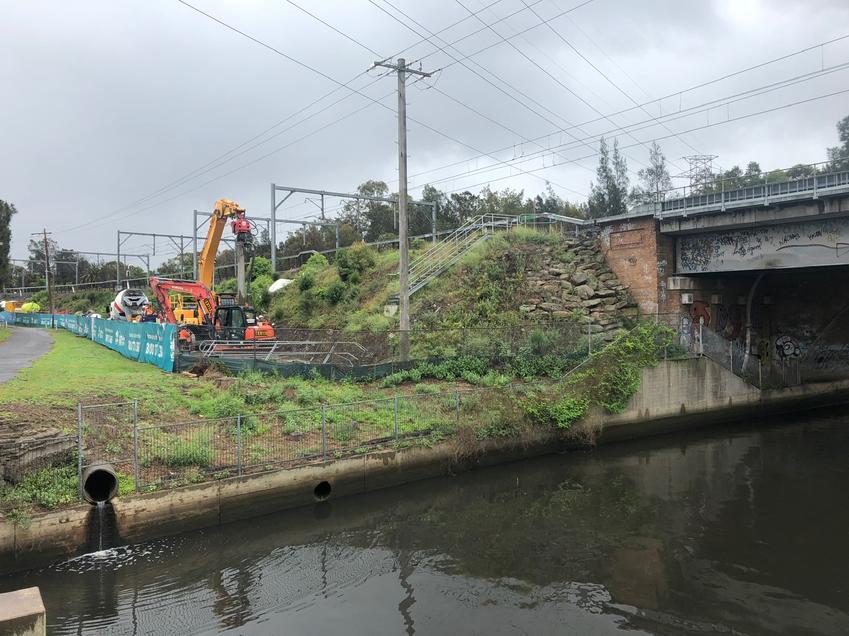 Sydney Metro is Australia’s largest public transport project and aims to deliver 31 new stations and more than 66km of rail line to revolutionise the way millions of people get around the country’s biggest city.

Over the past few years, Keller has played its part in the multibillion-dollar project, carrying out foundation and ground-improvement works at Central Station, Barangaroo and Sydenham.

After impressing main contractors John Holland and Laing O’Rourke at Sydenham, Keller was asked in 2019 to look at a similar project 15km further along the rail corridor near Cooks River.

“On the Sydenham project we used jet grouting underneath a proposed retaining wall to prevent possible slip failures of the new rail embankment,” explains Damien. “Due to the similar requirements for the Cooks River project, we initially thought it would require a similar technical solution. However, once we fully investigated the site and assessed its constraints, we proposed some alternative options.”

The working area within a live rail corridor was just 4m wide, with a single access point at one end. This meant the site was too small for a typical jet grouting batch plant – or to contain the spoil this technique would produce. To make matters more difficult, the natural gradient of the land was sloping towards the river, greatly increasing the risk of spoil causing environmental issues.

After carefully considering these factors, the clients design team developed a solution using proposed rigid inclusions – which could provide the same high-quality mass block beneath the surface to shore up the embankment.

Working in partnership with the client

“The advantages of rigid inclusions are that they require less equipment than jet grouting and produces minimal spoil,” he adds. “Installing rigid inclusions meant we could perform the works quickly during the scheduled three-week power outage and, best of all for the client, they’re much more cost-effective for the particular site constrains.”

Over the next few months, Damien and the team worked closely with the client’s designers to develop the scheme, leading to Keller being awarded the contract.

The technique typically involves using a displacement auger or vibrated displacement tube to penetrate the ground to the desired depth, with concrete pumped in as the tool is pulled upwards. Due to the ground conditions and low overhead power lines, the Keller team came up with the innovative idea of using a 320mm diameter vibrating tube mounted onto an excavator, which was quicker and cheaper than using an augered piling rig.

Initially, the design called for 178 columns, constructed to depths of 9m along a 100m stretch. But once on site, the team discovered an area of stiffer ground, which allowed them to refine the design and remove the need for around 40 columns. This enabled the team to more comfortably meet the deadline within network’s three-week power outage.

An additional challenge came when it was discovered the power cables were two metres lower than expected, which meant the proposed 9m columns wouldn’t be possible. “Understanding the pressure the client was under to complete the works promptly, we quickly redesigned the project to use 7m columns instead.”

Thanks to this approach, Keller was able to complete the project within three weeks, with the actual installation taking just six days.

After finishing the work in early February, Keller returned in March to construct the retaining wall between the rigid inclusions. This phase was overseen by Project Manager Jonathan Boyle for the retention works.

“The low cables directly above meant we had to use a rig with a short mast and drill in 1.8m sections, so in some places we had to install up to five separate pieces of auger to get to the right design depth.

“That made it a lot more labour intensive than traditional CFA, and we had to perform more manual quality checks to ensure everything was ok. Because of the small, congested site, you can’t get another piece of equipment past the rig once it was in place. So, the way we got the pieces of auger to the rig, the way we got the cages to the holes, and where we ran the concrete supply from, all had to be carefully planned. And we only had about a week to do it.”

That’s because, due to working on a live rail corridor, the piles had to be installed over a specific 12-day period, which included a weekend in March where round-the-clock shifts were completed while the power was isolated. The final 10 piles were completed successfully in early May.

“With this project we’ve shown that we have the team, the experience and the equipment to tackle these difficult challenges,” says Jonathan. “We’ve really built up a good relationship with this client on one of the country’s most high-profile public projects. Hopefully we’ll be able to help them again in the future.”
Jonathan Boyle
Project Manager
Published on
20 Jul 2020