A billion-dollar vision to reinvigorate the centre of Adelaide is underway, with Keller beating competition from across Australia to provide ground retention and foundation works. We spoke to Senior Design Engineer Richard Flynn about how Keller redesigned the original proposal to overcome challenging ground conditions, protect a heritage building, ensure a high quality buildable solution and reduce time on site.

A world-class hub for the arts, culture, tourism and entertainment – that’s how Adelaide envisions the redevelopment of Festival Plaza, which sits in the heart of the city. Around 16,500m2 of public space is currently being enhanced around the existing Festival Centre, railway station, casino and Parliament House, with the aim of creating an inspiring and compelling destination for locals and tourists alike.

In the pipeline is a new 24-storey office tower, extensive retail space and an extended car park, all being developed by the Walker Corporation. When Walker’s put the tender out for early works, this high-profile project attracted attention from the biggest contractors and geotechnical firms across the country.

After putting in a competitive price and a unique design, Keller was chosen by contractor Delta Group to perform piling for the car park retention wall and building foundations.

“The client’s original idea for the retaining wall was for Keller to use soldier piles in order to minimise the amount of drilling into the hard sandstone and then come back later to create an inner cut-off wall,” explains Richard. “However, we believed we could remove the need for that second mobilisation by opting for a secant pile wall instead. Not only would this save the client time, but it would also make the basement larger and provide a stiffer solution with more piles that could safely support the structural loads more efficiently.”

The challenge with this option, Richard explains, was the ground conditions. “Drilling through 4-6m of high-strength Hallett Cove sandstone has its risks. However, we invested a lot of time, carefully going through the design and tooling specifics to ensure we could confidently complete the job to the highest standard.”

Added to the challenge was a nearby heritage-listed building – the Old Parliament House, among the oldest structures in Adelaide and one of particular political and architectural significance. During construction of the retaining wall, the footings of the building had an onerous movement tolerance of less than 5mm.

“No one wants to see such a historic building damaged in any way, so we carried out detailed computer modelling to ensure we wouldn’t disturb it,” adds Richard. “This was another benefit of using a secant system, which is much stiffer than soldier piles.” Since construction, the new wall has moved less than 3mm.

Starting on site in January 2019, the crew used one extra heavy-duty continuous flight auger (CFA) rig and one cased CFA rig to install 470 No. hard and 470 No. soft CFA piles – all 750mm in diameter. The team successfully completed the wall for the 650m perimeter basement in May 2019.

Once the client had excavated the basement, Keller was back on site in August for phase two: the foundation piles.

“The original scheme had particularly large pile caps, with piles spaced 2.5 diameters apart from each other,” says Richard. “This is a common approach, but we proposed bringing the piles much closer together to create smaller caps, which was more cost-effective for the client.”

During the project, the number of foundation piles almost doubled in size, with the developer deciding to future-proof the site in anticipation of more buildings in the future. Keller rose to the challenge and completed over 550 No. CFA piles of varying diameters by early December 2019.

“In total we estimate we’ve saved the client around four weeks through our proposals,” says Richard. “This has been one of the biggest marquee projects in Adelaide for some time and all the major players wanted it. We do a lot with Delta, so when we proposed a different way of executing the project, they had the confidence we could pull it off. It’s been a very challenging project at times but I’m delighted we’ve been able to deliver.”
Richard Flynn
Senior Design Engineer 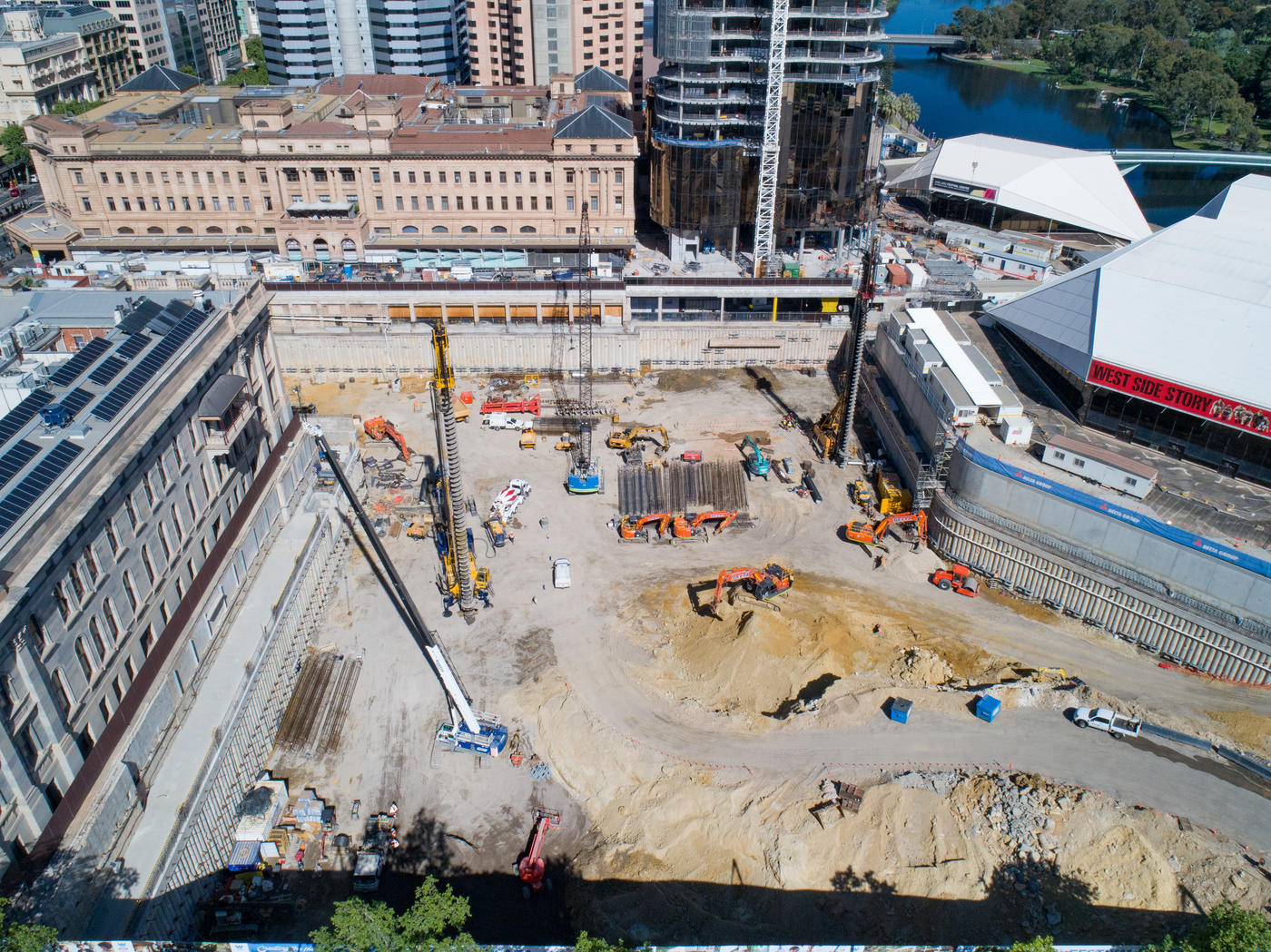