Sydney’s A$12 billion Metro City & Southwest extension is well underway and Keller has successfully completed a project to stabilise the rail embankment at Sydenham Station. 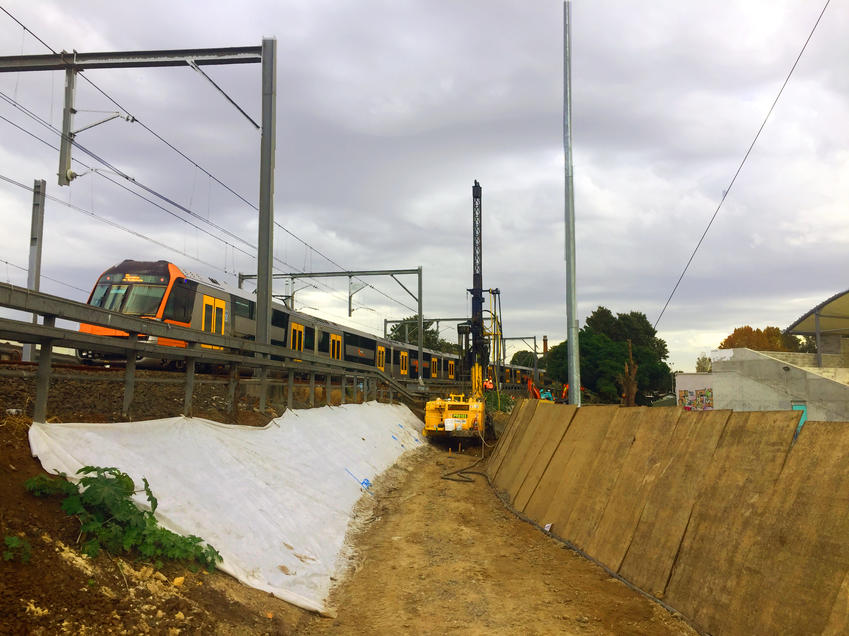 The first stage of Australia’s biggest public transport project, the Sydney Metro, opened in May 2019, with 13 stations servicing the north-west of the city. The fully automated rapid transit system is now to be extended to cover the famous Harbour area, central business district and southwest suburbs. By 2024, the Metro will have 31 stations and cover 66km of track, transforming the way people get around the country’s largest city.

One of the current mainline stations undergoing a A$300 million upgrade to make way for the Metro is Sydenham Station, 8km from the city centre.

As part of the works, joint contractors John Holland and Laing O’Rourke needed to improve the existing rail corridor and construct a retaining wall founded on piles and jet grout columns to stabilise the embankment.

Stepping up to the challenge

It was never going to be easy. The site, around 500m from the station, lay between a football ground on one side and a live rail corridor on the other. It measured only 200m in length and just 2.4m wide in places.

In initial consultations with other ground engineering firms, the client was told the jet grouting  wasn’t possible given the site constraints and ground conditions. But Keller wasn’t so easily deterred.

“They specified the technique and we gave them exactly what they wanted,” says Project Manager Damien Bray. “Access was limited to 2.4m and our rig was 2.35m wide, so it was just a case of sequencing the works, starting at the end and working your way out very carefully.

“Due to the site restrictions, jet grouting was one of only a couple of suitable options, so we sat down with the client, worked through their specification, agreed a few revisions and then we got on with the job.

“The clay was very soft, so we began with three trial columns from which we were able to establish efficient parameters and demonstrate we could meet the design requirements.”

In total, Keller installed 82 jet grout columns (1.2m diameter) underneath the proposed retaining wall, designed to prevent any slip failures due to the increased loading on the rail embankment. The columns were founded on the underlying sandstone and ranged in depth from 4m to 6.5m.

With access proving difficult, spoils had to be rigorously managed. Keller sequenced works to maximise available storage space and used two excavators to shift the spoils to stock piles. Resources were also an issue, with the team using water four times quicker than it could be supplied. A bit of innovative thinking led the team to build a custom pressurised water system to ensure the tanks were continuously filled around the clock and maintain optimum production levels.

Safety is paramount on any Keller site, and working so close to a rail corridor and power line needed to be considered. All staff were fully trained and approved to work within the live rail area, and excavators were fitted with height and slew restrictors.

This is the third Sydney Metro project that Keller has been involved in. The business unit is currently working at the new Barangaroo station and has successfully completed works at Central Station in late 2018. And having proven it can deliver when others can’t, this might not be the last time Keller’s involved in this historic public transport project.

“This was one of those projects where everything ran really well,” says Damien. “The project went exactly as planned, the works were performed safely and completed on time with excellent quality. The client was very happy and a pleasure to work with.”
Damien Bray
Project Manager
Published on
14 Jul 2019